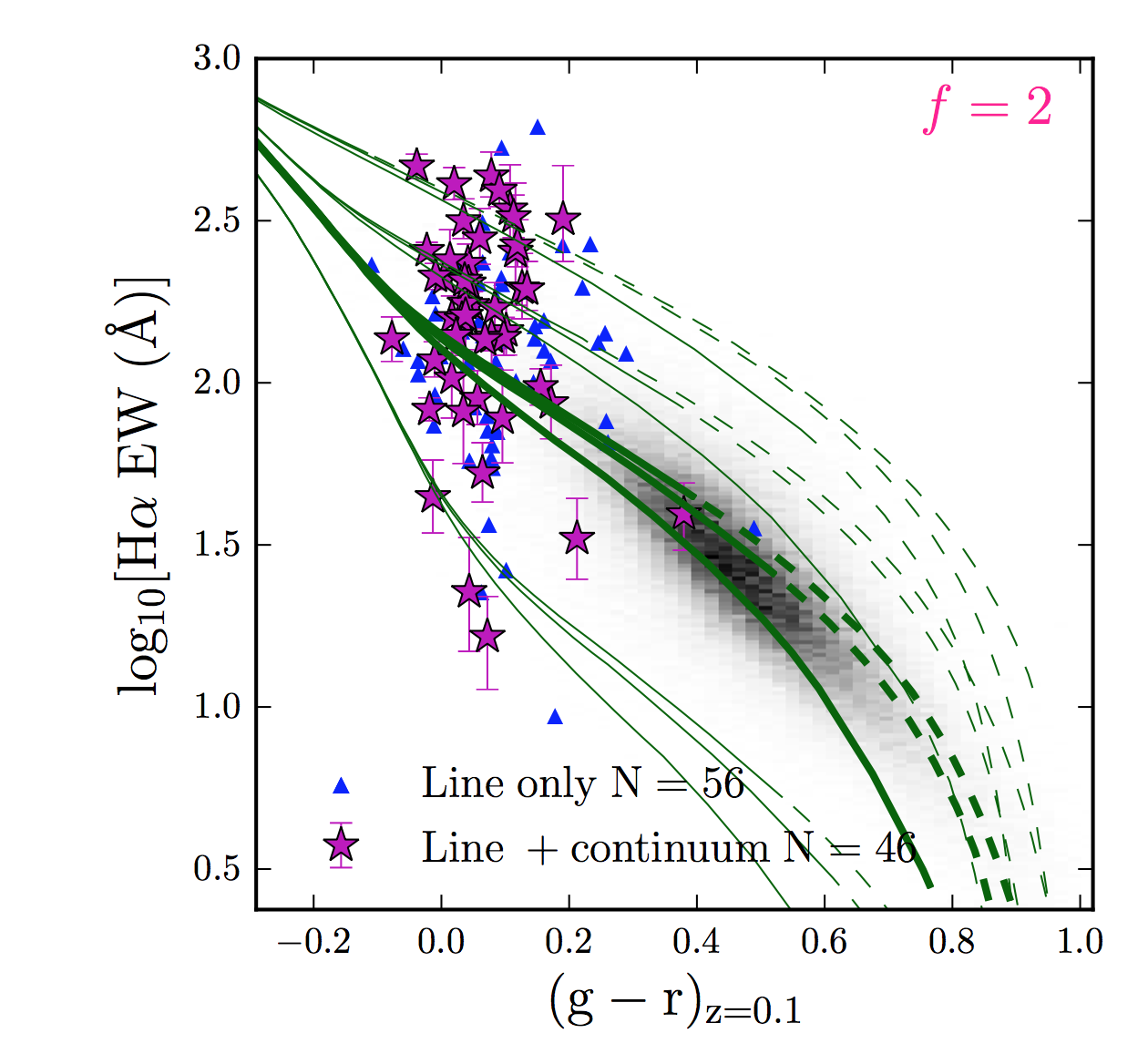 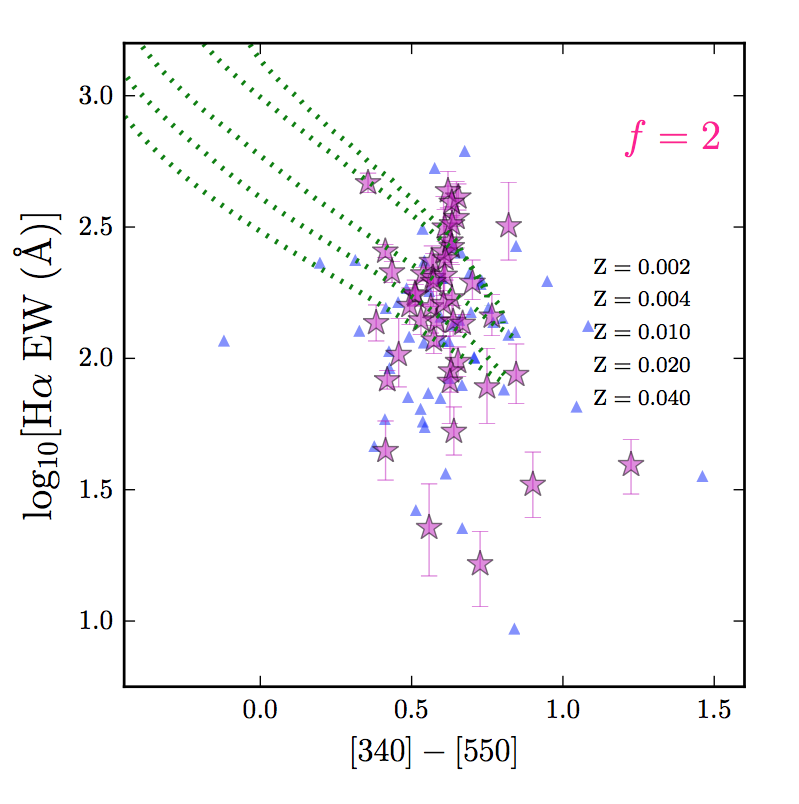 By using a mass-complete sample of 102 galaxies at z~2 in the COSMOS field from ZFIRE, we investigate the initial mass function (IMF) of star-forming galaxies by revisiting the classical technique of using the Hα equivalent widths (EW) and rest-frame optical colours. Due to an excess of high Hα-EW galaxies that are up to 0.3--0.5 dex above the canonical Salpeter locus, the Hα-EW distribution is much broader (10-500Å) than can be explained by a simple monotonic SFH with a standard Salpeter-slope IMF (top left figure). This result is robust against uncertainties in dust correction and observational bias, and no single IMF (i.e. non-Salpeter slope) can explain the distribution. Starburst models cannot explain the Hα-EW distribution because: 1) spectral stacking still shows an excess Hα-EW in composite populations and 2) monte-carlo burst models show that the time-scale for high Hα-EW is too short to explain their abundance in the ZFIRE sample. We investigate other physical mechanisms including models with variations in stellar rotation, binary star evolution, metallicity, and the IMF upper-mass cutoff. IMF variations and/or highly rotating extreme metal poor stars with binary interactions (bottom left figure) are the most plausible explanations for our data. If the IMF varies, then the highest Hα-EWs would require very shallow slopes with no one slope able to reproduce the data. Thus, the IMF would have to vary stochastically. We conclude that the stellar populations at z~2 show distinct differences from local populations (top left figure, 2D grey histogram) and there is no simple physical model to explain the large variation in Hα-EWs at z~2. 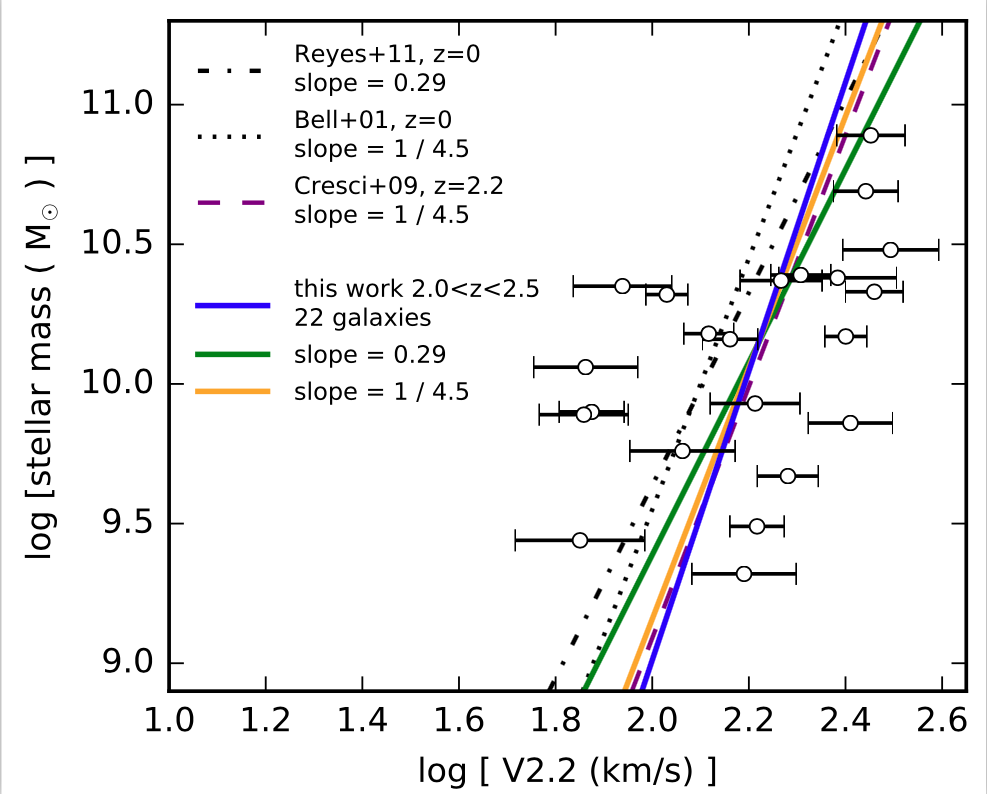 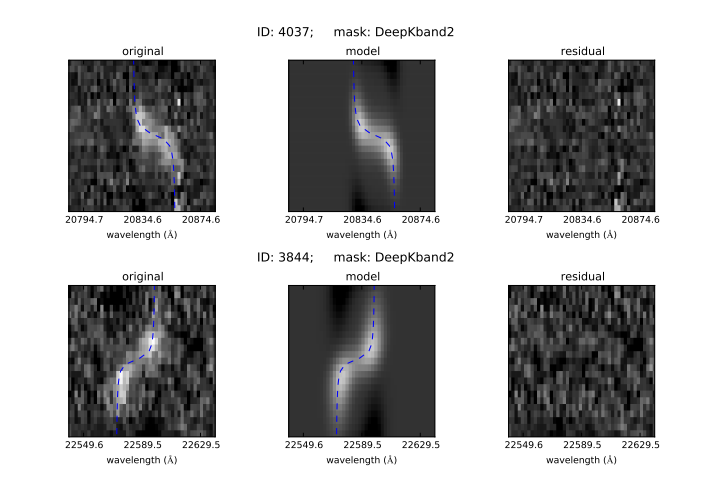 A major goal for galaxy evolution models is to understand the interplay between dark matter and baryons. An important test for the mass assembly of galaxies is to measure the Tully-Fisher relation (stellar mass versus rotational velocity), because it describes the relation between angular momentum and stellar mass, and the conversion of gas into stars versus the growth of dark matter haloes by accretion. As such, models predict that at early times galaxies at fixed rotational velocity used to have less stellar mass. Using the ZFIRE dataset, we test this scenario by measuring the rotational velocities of 22 galaxies at 2.0 < z < 2.5 (looking back 10.5 billion years). We find that the relation is indeed offset compared to z = 0, which holds assuming various slopes (green and orange solid lines versus dash-dotted and dotted lines). We present a careful assessment of systematic effects that could potentially reconcile previous discrepant results in the literature at lower redshift. Our study provides timely new constraints on the evolution of kinematics of star-forming galaxies at z > 2, an epoch that has only recently become accessible for large spectroscopic surveys. 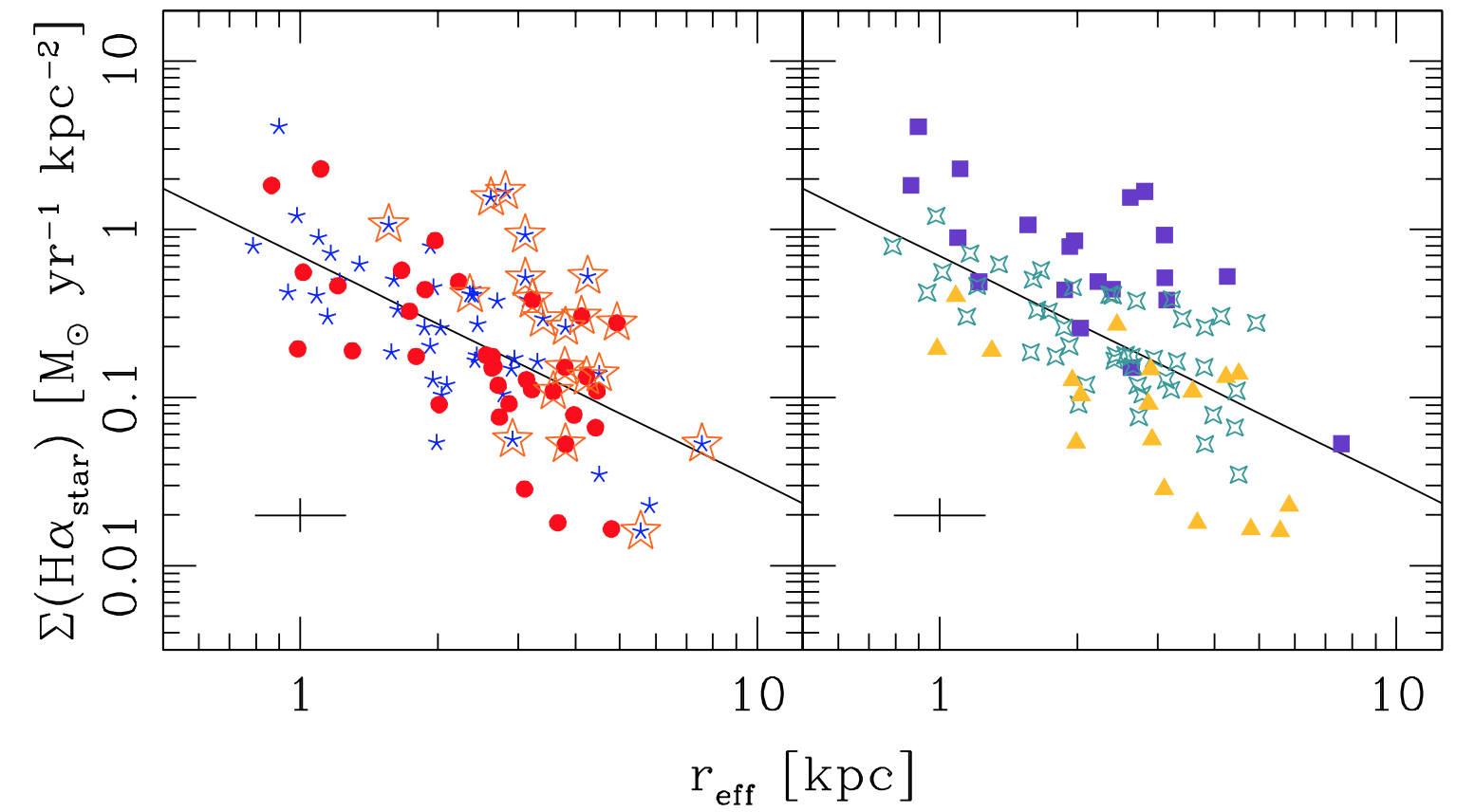 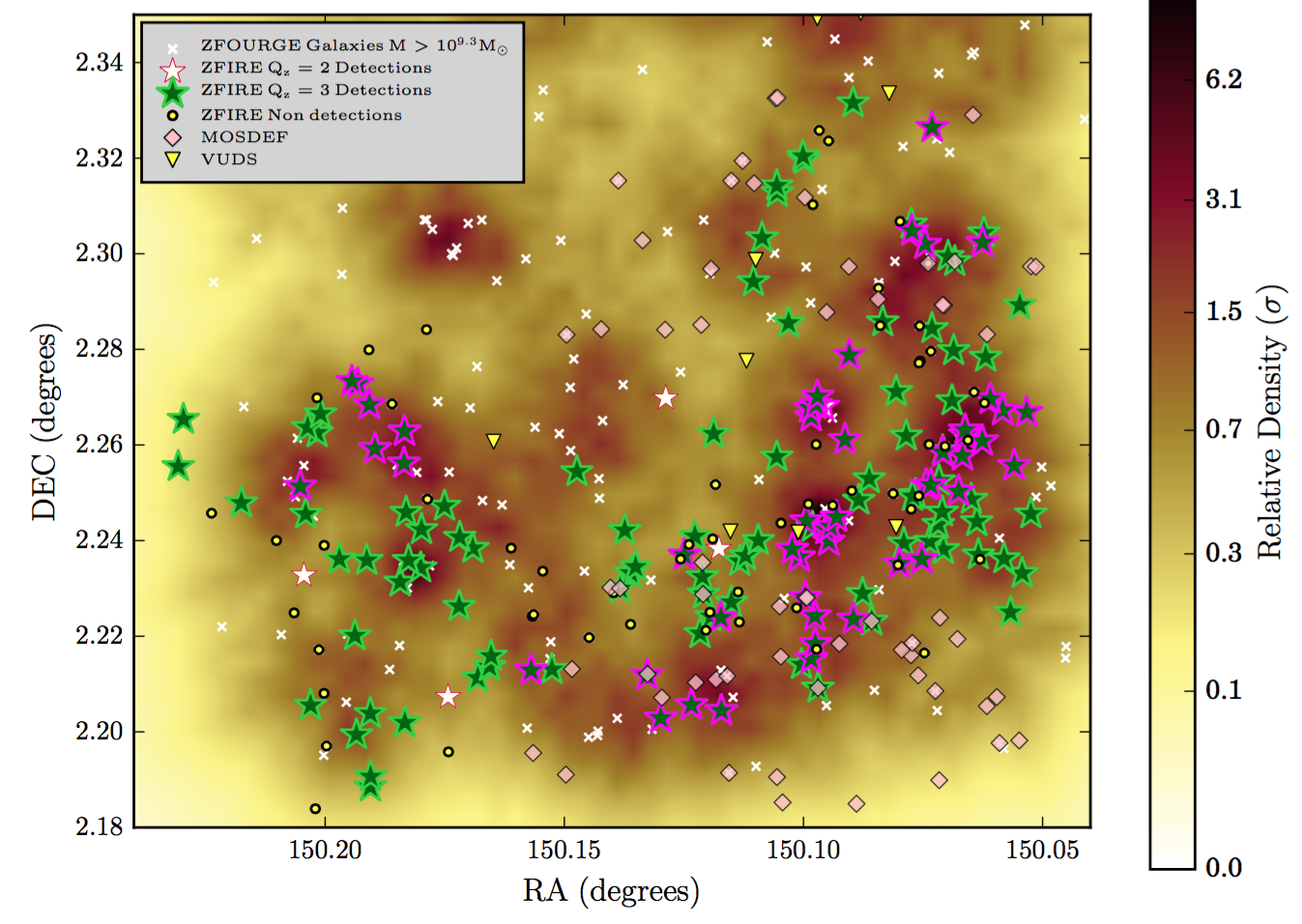 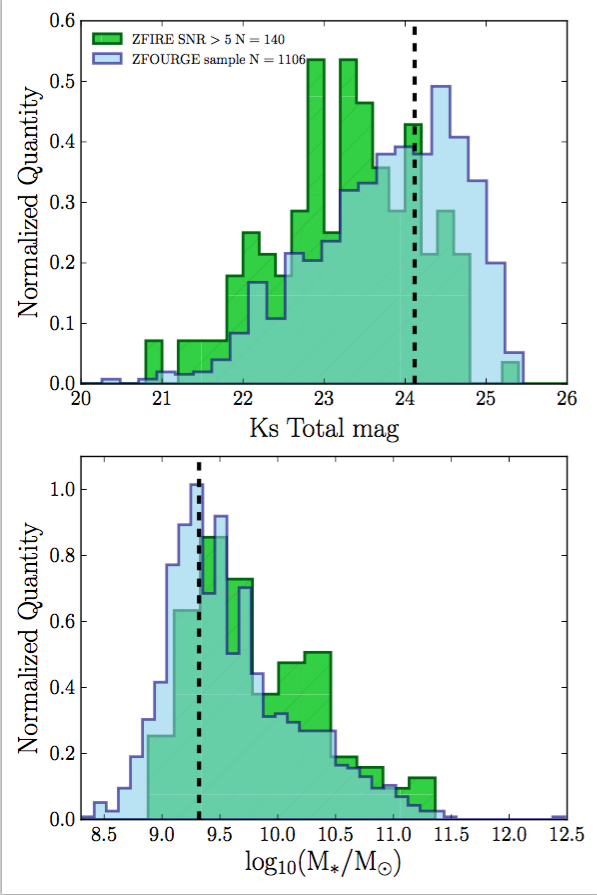 We present an overview and the first data release of ZFIRE, a spectroscopic redshift survey of star- forming galaxies that utilizes the MOSFIRE instrument on Keck-I to study galaxy properties in rich environments at 1.5 < z < 2.5. ZFIRE measures accurate spectroscopic redshifts and basic galaxy properties derived from multiple emission lines. The galaxies are selected from a stellar mass limited sample based on deep near infra-red imaging (KAB < 25) and precise photometric redshifts from the ZFOURGE and UKIDSS surveys as well as grism redshifts from 3DHST. Between 2013–2015 ZFIRE has observed the COSMOS and UDS legacy fields over 13 nights and has obtained 211 galaxy redshifts over 1.57 < z < 2.66 from a combination of nebular emission lines (such as Hα, [NII], Hβ, [OII], [OIII], [SII]) observed at 1–2μm. Based on our medium-band NIR photometry, we are able to spectrophotometrically flux calibrate our spectra to ∼10% accuracy. ZFIRE reaches 5σ emission line flux limits of ∼3 × 10−18 erg/s/cm2 with a resolving power of R = 3500 and reaches masses down to ∼109M⊙. We confirm that the primary input survey, ZFOURGE, has produced photometric redshifts for star-forming galaxies (including highly attenuated ones) accurate to ∆z/(1 + zspec) = 0.015 with 0.7% outliers. We measure a slight redshift bias of < 0.001, and we note that the redshift bias tends to be larger at higher masses. We also examine the role of redshift on the derivation of rest- frame colours and stellar population parameters from SED fitting techniques. The ZFIRE survey extends spectroscopically-confirmed z ∼ 2 samples across a richer range of environments, here we make available the first public release of the data for use by the community.

We investigate the star formation rate (SFR) dependence on the stellar mass and gas-phase metallicity relation at z=2 with MOSFIRE/Keck as part of the ZFIRE survey. We have identified 117 galaxies (1.98 < z < 2.56), with 8.9<\log(M⊙) < 11.0, for which we can measure gas-phase metallicities. For the first time, we show discernible difference between the mass-metallicity relation, using individual galaxies, when deviding the sample by low (< 10 M⊙/yr) and high (>10 M⊙/yr) SFRs. At fixed mass, low star-forming galaxies tend to have higher metallicity than high star-forming galaxies. Using a few basic assumptions, we further show that the gas masses and metallicities required to produce the fundamental mass-metallicity relation, and its intrinsic scatter, are consistent with cold-mode accretion predictions obtained from the OWLS hydrodynamical simulations. Our results from both simulations (blue) and observations (orange) are suggestive that cold-mode accretion is responsible for the fundamental mass-metallicity relation at z=2 and demonstrates the direct relationship between cosmological accretion and the fundamental properties of galaxies. 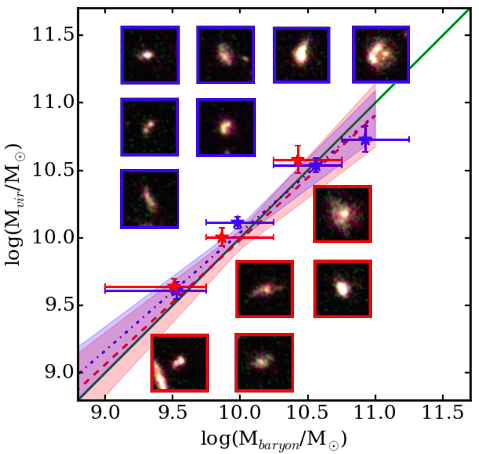 We perform a kinematic analysis of star-forming galaxies at z~2 in the COSMOS legacy field. Our sample consists of 75 galaxies from z=1.9-2.4, 28 of which are members of a known overdensity at z=2.095. We measure Hydrogen Alpha emission-line integrated velocity dispersions and fluxes to estimate virial, stellar, and gas masses and derive correlations between these properties for cluster and field galaxies at z~2. We find evidence that baryons dominate within the central effective radius. However, we find no statistically significant differences between the cluster and the field, and conclude that the kinematics of star-forming galaxies at z~2 are not significantly different between the cluster and field environments. 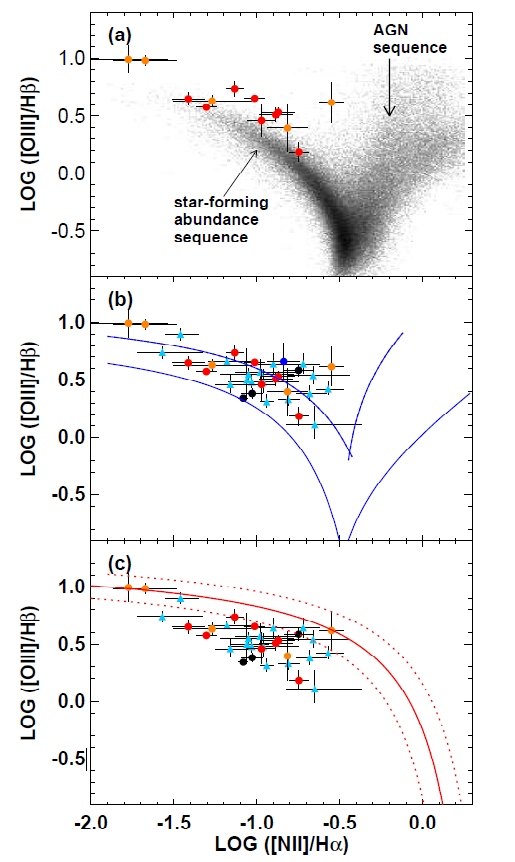 We investigate the ISM properties of 13 star-forming galaxies within the z~2 COSMOS cluster. We show that the cluster members have [NII]/Ha and [OIII]/Hb emission-line ratios similar to z~2 field galaxies, yet systematically different emission-line ratios (by ~0.17 dex) from the majority of local star-forming galaxies. We find no statistically significant difference in the [NII]/Ha and [OIII]/Hb line ratios or ISM pressures among the z~2 cluster galaxies and field galaxies at the same redshift. We show that our cluster galaxies have significantly larger ionization parameters (by up to an order of magnitude) than local star-forming galaxies. We hypothesize that these high ionization parameters may be associated with large specific star formation rates (i.e. a large star formation rate per unit stellar mass). If this hypothesis is correct, then this relationship would have important implications for the geometry and/or the mass of stars contained within individual star clusters as a function of redshift. 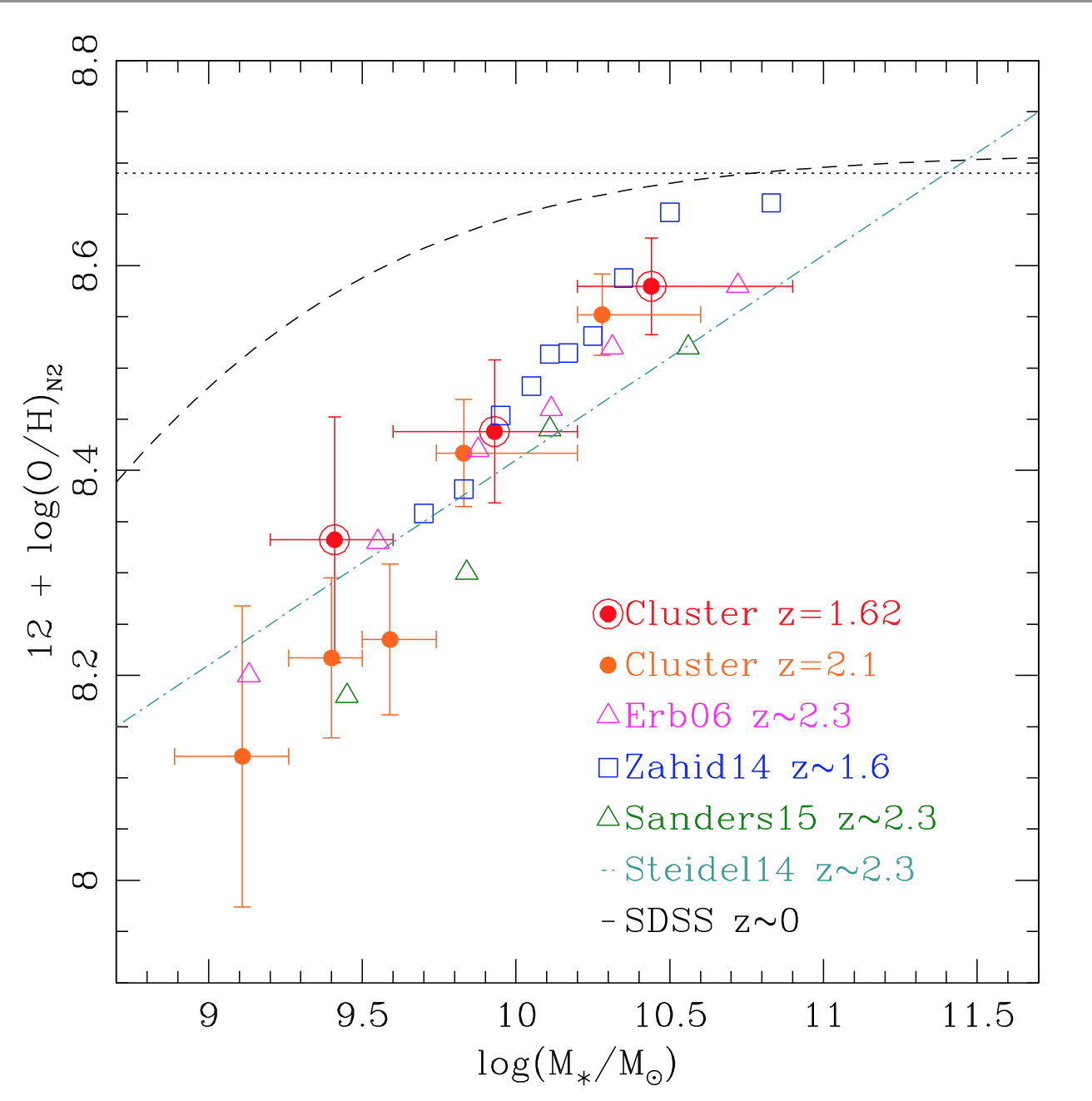 We spectroscopically survey the galaxy cluster XMM-LSS J02182-05102 (hereafter IRC 0218) and measure the cluster redshift and velocity dispersion to be z=1.6233+/-0.0003 and sigma=254+/-50 km/s. IRC 0218 has an integrated Hα star formation rate of about 325 M⊙/year. The elevated star formation in the cluster core is driven by the concentration of star-forming members. The galaxies in IRC 0218 show a similar trend between gas-phase metallicities and stellar masses (MZR) as the field at z~2, i.e. there is no environmental imprint on the MZR. 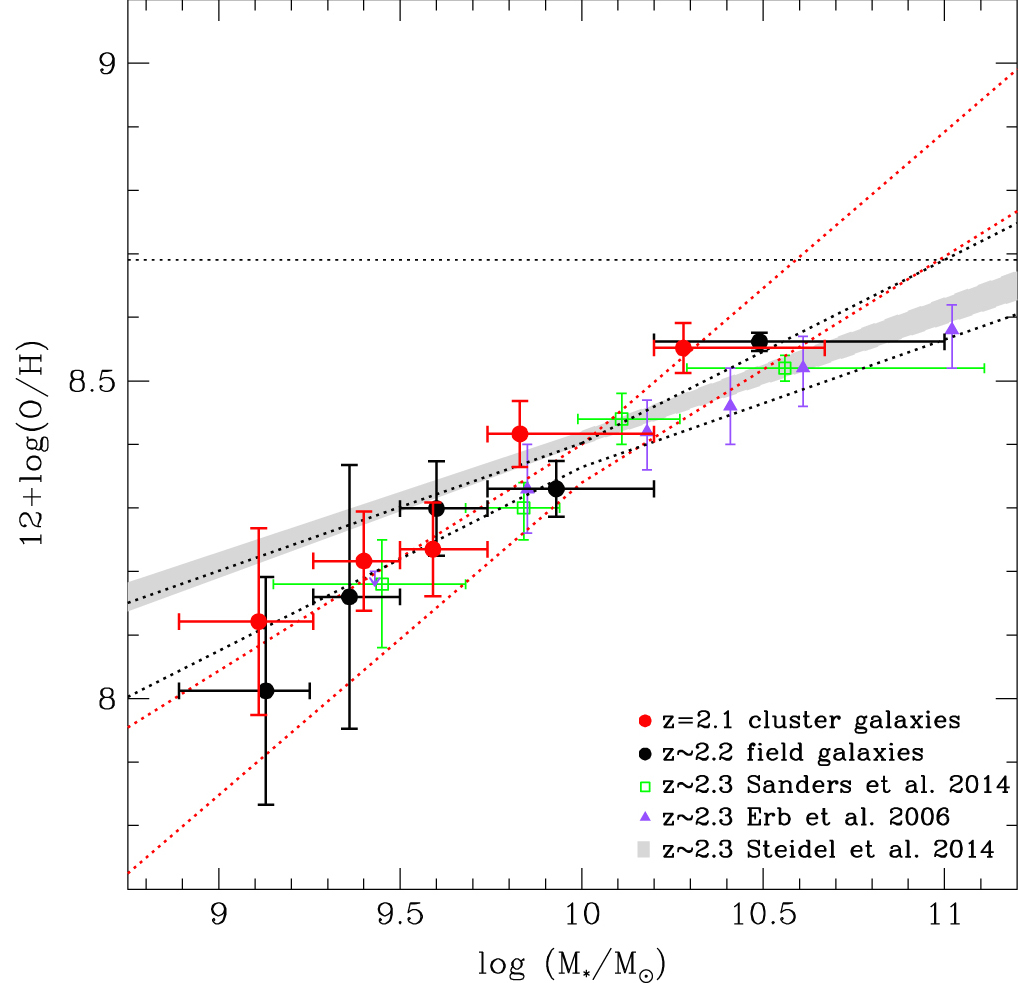 We investigate the environmental dependence of the mass-metallicity relation at z=2 with MOSFIRE/Keck using 43 cluster and 74 field galaxies. For the first time, we show that there is no discernible difference between the mass-metallicity relation of field and cluster galaxies to within 0.02dex. Our results from both simulations and observations are suggestive that environmental effects, if present, are small and are secondary to the ongoing inflow and outflow processes that are governed by galaxy halo mass. 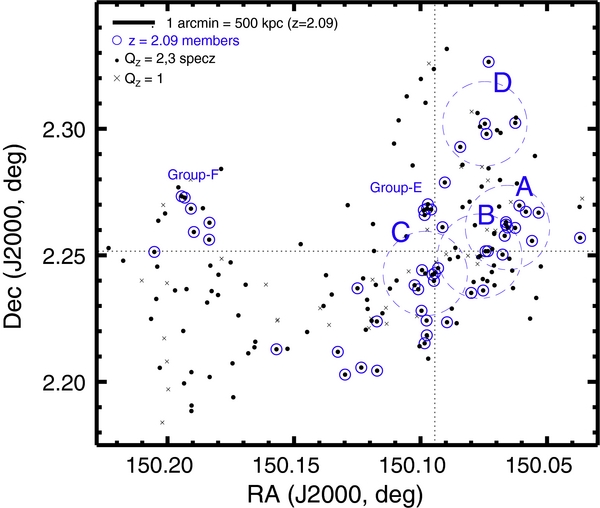 The z~ 2 cluster candidate in the COSMOS field was first identified using deep medium-band photometry in the ZFOURGE survey (Spitler et al. 2012). In this work we obtained NIR spectroscopic data on MOSFIRE from the KECK telescope and confirmed that this is indeed a galaxy cluster at z = 2.095. This is the first study of a galaxy cluster at z ≥ 2 with the combination of good spectral resolution (~ 26 km/s) and large number of confirmed members (> 50) needed to impose a meaningful constraint on the cluster velocity dispersion (552 +/- 52 km/s). &#923CDM simulations suggest that this cluster will most likely evolve into a Virgo-like cluster at z ~ 0.